When I first came to this city, I was keen to visit all the different places in Mumbai. I asked many of my friends, colleagues for their recommendations. But I was disappointed when I got answers such as 'Nothing much, you can either go to Juhu Beach or Girgaon Chowpaty' or 'We have never thought of it' or 'We are so tired with the travel throughout the week that we prefer to stay home on weekends, we hardly go out in Mumbai.'. After talking to many people I got a list of standard places (I had mostly heard of and visited during 'Mumbai Darshan' tour in my childhood), such as Worli Sea Face, Girgaon Chowpaty, Juhu Beach, CST station, Nariman Point, Nehru Plenetorium (but I was also told that it is ideal for kids) , Haji Ali, Mahalaxmi temple, Babulnath temple etc. and some went as far as Elephanta caves.

Sure this city must have something more to offer. A city established 300-400 years ago, with influence of Portuguese, British culture, with people from varied background settling here for decades (including Parsi/Zoroastrian community, Jews, Christians, and people from all the possible corners of India), the city must be more than few popular tourist attractions.

As I started searching for all possible sources (TripAdvisor, Lonely Planet etc.), I started finding some interesting places which were less heard of - Kanheri Caves (Situated in Borivali National Park, Kanheri caves were carved out of the hills dating back to 1st century BC), Kala Ghoda Art Festival (Art festival happening in Mumbai during First Saturday of February till second Sunday of February i.e. 10 days of creativity, fun, emotions and a lot to learn), Mt. Mary Church in Bandra, Gilbert Hill Andheri and the exploration continues.

We have set a tradition of doing something different or at least trying some new restaurant for every birthday and anniversary. This year we decided to try one of the walking tours of Mumbai. We opted for 'Apollo Gate and The Front Bay Walk' by Raconteur walks. The walk lived up to the name of the group. The guide was a student, in his early 20s along with couple of more trainee guides (younger than him). It was easy going tour with fun filled facts such as how & why Mumbai was given as a wedding gift to Prince Charles by Portuguese, where did the prince thought Mumbai was located when he received it, how the old day Mumbai looked like (with maps and photos available in St. Thomas Cathadral), how the first person building ships was selected and how it rained gold in Mumbai (literally). The group had lot of fun filled, interesting, never-heard-of anecdotes to offer which made the tour very interesting indeed. We had passed some of the buildings and areas of this tour, in past without realising their historical significance. The tour gave us all new perspective towards modern day Mumbai.

This tour also made us realise that there are so many different groups offering walking & cycling tours of different parts of Mumbai. It also opened up the possibilities of finding more such hidden gems in the city, which led us to the second exploration - The street arts in Bandra. 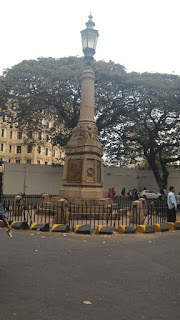 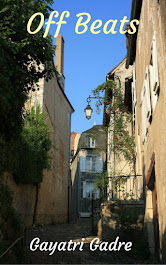